Why Is Modesty So Important?

Just after I turned 16 and got my driver’s license, I started working for a friend of our family, driving their kids to after-school activities. In addition to my license, I suddenly had an income to spend on clothes. The freedom was liberating! Without the overseeing eye of my mom, I started purchasing my clothes for the first time in my life.

In one of those first few shopping trips, I came home with a mini-skirt. It came to just the end of my fingertips, and I justified the purchase because I had shorts the same length. My mom was not happy. But instead of nagging me to return them she suggested I get the advice of another mom I admired, one whose opinion I would respect.

I went to one of my youth leaders. She was young and hip, and I felt she would side with me. First, she had me try on the new skirt. She admitted it was cute, but then had me sit down. She sat straight across from me and said: "I can see your pink underwear." I pressed my legs closer together to no avail. She could still see them.

I had wanted to wear what all the other girls at school were wearing, but I also didn't want to expose myself. I felt torn between the two desires. Reluctantly, I returned the mini skirt, feeling it was the only clear answer.

My whole life I had been taught the principles of modesty, but I had never considered why. Did it really matter if my underwear was visible? It was just another article of clothing after all. Why, when the world didn’t seem to care, did it matter to me?

Understanding Why Modesty Is So Important

Carol F. McConkie, General Young Women’s Presidency of the L.D.S. church, defined modesty as this: “Modesty is not vain or boastful. Modest people do not use their bodies or their behavior to seek approval from the world or to draw attention to their own real or supposed accomplishments or desirable attributes.” (Courage to Choose Modesty, October 2014)

Sister McConkie said this long after my internal struggle with a mini skirt as a teen, but her explanation speaks to me now, so many years later. I had wanted to use the mini skirt as a means to seek approval from the world. I wanted to fit in, not stand out.

On some level, I think I could relate to the second group of people in Lehi’s vision (1 Nephi 8:24-28). This group had stayed along the path and made it to the tree, partook of the fruit, but then felt ashamed. They were more concerned with what the people in the great and spacious building were saying then the blessing of partaking of the fruit - and staying by the tree.

By returning the skirt, I was deciding to stay by the tree and ignore the taunting disapproval of those in the world. My decision was one in a series of choices I made as a teen to invite the spirit into my life. I found the small things like dressing modesty, avoiding vulgar language and movies helped me feel closer to my Savior which in return gave me have the courage to make the harder decisions in life.

The Book of Mormon is full of battles. Times when the Nephites had to fight against the Lamanites for their lives, families, and their liberty to worship God. Many times, the Lamanites would show up for battle in nothing more than a loincloth. The Nephites were more purposeful and intentional in what they wore, making sure to cover their bodies for protection from the weapons of the Lamanites.

Similar to the counsel Paul gave to the Ephesians to put on the whole armor of God, physically covering our bodies seems to have spiritual implications.

“Put on the whole armour of God, that ye may be able to stand against the wiles of the devil. For we wrestle not against flesh and blood, but against principalities, against powers, against the rulers of the darkness of this world, against spiritual wickedness in high places.” (Ephesians 6:11-12)

Just as the Nephites were at war, we too are holding an enemy at bay. The adversary may not always be visible, but his power and influence can still affect our spiritual well-being.

Small and simple is the way the Lord works. To keep from becoming overwhelmed he gives little commandments to prepare and protect us. I have learned obedience to the small and simple brings comfort, security, and guidance in greater abundance.

Standing Out vs. Fitting In

Many of today’s styles could be considered to “stand out.” They send messages like “Notice me.” There is a difference between standing out to be noticed and standing out because you are doing what’s right. Trying to fit in to avoid appearing different has a false sense of comfort associated with it. When we follow the crowd and strive to fit in, it often means we are relinquishing other values and standards in the process.

We weren’t created to fit in – we were meant to stand out! When we fall prey to the distraction, comparison, and discouragement of trying to fit in we are right where Satan wants us. Be bold and brave - stand out, be different, and be true to what you know is right!

How do your choices make you stand out? Why do you think modesty is so important? 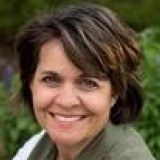 I’m a wife, mother, friend, and storyteller. I have a love for learning, giggling with my grandson and tandem biking with my husband. I believe wisdom goes beyond being smart or having basic knowledge. It is the culmination of experiences that help us become. While each of our challenges may be unique, we have the opportunity to choose how we will react, learn and grow. My journey has taught me that I don’t have all the answers, but I do have a voice to share what I’ve learned. Life can either teach us or defeat us – the choice is ours. You'll find me blogging at Choosing Wisdom.

Wanting to know how to come up with blog post ideas? Here you'll find a list of 13 ideas you can use when the creativity doesn't seem to be flowing!
Read More

If you're looking to make money with your blog from ads, then you should consider joining an ad network. Here are 10 of the best ad networks for bloggers.
Read More

Looking to monetize your fashion blog with affiliate marketing? In this article, we'll show you 23 of the best fashion affiliate programs for fashion bloggers.